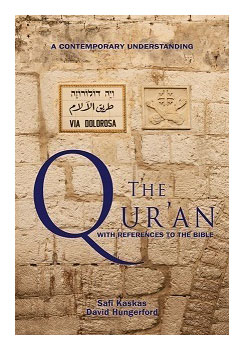 A Christian and a Muslim have come together to produce a unique version of the Quran — a full-text English edition of the holy book, but with a twist.

“The Qur’an With References to the Bible” relies upon 7th century classical Arabic and comes complete with parallel verses from the Christian Bible.

Dr. Safi Kaskas, a Muslim businessman, and Dr. David Hungerford, an orthopedic surgeon who is a practicing Christian, have compiled the Quran in hopes that the translation will help bridge the divide between Christians and Muslims in America.

Hungerford and Kaskas recently told “The Church Boys” podcast that they first met as board members of Bridges to Common Ground, an organization that works to foster greater understanding between Christians and Muslims.

“When we met, Dr. Kaskas had this as a dream and (it was) something he had been working on in his mind,” Hungerford said. “We were both kind of prepared for this project (and the) collaboration just became so obvious to us and we’ve been working on it together ever since.”

Kaskas said he believes their version of the Quran offers up a unique opportunity for readers to have a true contemporary reading of the text along with important parallels between what is written in both Islamic and Christian scriptures.

He appealed to his own back story in sharing his motivation for embarking on the project, focusing specifically on his experience after coming to America.

“When I first came to the United States, if it wasn’t for my American neighbors opening their hearts and their homes for me, I wouldn’t have made it,” Kaskas said. “I feel a debt to this country.”

He continued, “I hate to see that the same Americans are feeling bad about Muslims now. I want to repair this relationship.”

Kaskas said he believes fixing the situation is predicated upon finding and highlighting common ground between Christians and Muslims.

“The best way to do this is from our holy books,” he added.

Hungerford and Kaskas noted that they discovered more than 3,000 verses in the Quran that have similar meanings and purposes in the Bible, so they set out to place biblical references at the bottom of each relevant page in the Quran.

They’re hoping that the book will help to dispel the “ignorance” that they see when it comes to the ongoing friction between the two groups; they’re also hoping the Quran edition helps spark “an open discussion.”

“What our hope is is that Christians will read it and the eyes of their misunderstanding and the depth of their ignorance will be dispelled so they can now look upon Muslims as part of the Abrahamic tradition,” Hungerford said.

But they want people to know that the book isn’t intended to blur the lines between the two faiths or to merge them.

As for why the two men believe so many extremists have claimed to commit acts of terror in the name of Islam, Hungerford pointed to a long human history of people co-opting and perverting peaceful religious sentiment.

“If you look at religion, there has never been a time in mankind where somebody who professes religion has not taken aspects of it out of context and distorted its meaning,” he said. “If we look at Christianity, Christianity was used to justify the Inquisition, burning witches, slavery.”

He said these elements weren’t a part of Christianity and were, instead, distortions, comparing that to what’s happening among Muslim extremists.

Kaskas added that he believes it’s essential for people to stop spouting anti-Muslim sentiment, as he said it can contribute to radicalization. Instead, he called on people to be more accepting and welcoming.

“If we continue to beat the Muslims on the head and call them names and call their religion names they’re going to feel that they’re unjustifiably attacked,” he said. “This is the first step to get somebody to be radicalized.”

Kaskas also said Christians might be surprised to discover some of the Quran’s contents, particularly when it comes to the text’s treatment of Jesus, the central figure in Christianity.

“The way Jesus was born in the Quran he had a miraculous birth his life was miraculous, the Quran states miracles that were not even stated in the Bible,” he said. “Everything about Jesus as far we’re concerned is miraculous.”

In the end, Kaskas warned that he and Hungerford are trying to prevent some Muslims from misinterpreting the faith.

“We are fighting for survival to defend what we believe to be a religion of peace,” he said, adding that it’s still uncertain whether the fight can be won.