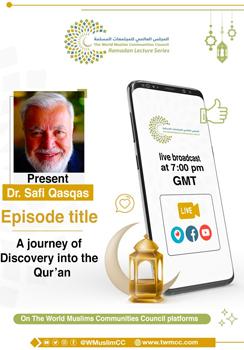 The Qur’anic challenge and the future

I am grateful for this invitation at the beginning of the month of Ramadan about the Qur’an. Allah says in His holy book:

“The month of Ramadan is when the Qur’an was revealed, giving guidance to humanity, and clear messages of guidance and a standard for distinguishing right from wrong.”

The fact that the Qur’an was revealed during the month of Ramadan and Muslims focus on reading the Qur’an during this month, is a good reason for us to pose and to reflect, I would have loved to talk to you today about the virtues of Ramadan, about kindness, patience, charity, forgiveness, but the first thought that comes to mind is this verse:

This verse is talking about my responsibility and yours to reflect on our short comings, our problems and the need to find solutions in the Qur’an.

So instead of talking to you today about my Journey of discovery and the beautiful things I discovered in the Qur’an, I find myself obligated to talk about how to use the Qur’an to solve problems related to our children and our grandchildren.

Muslims traditionally read the Qur’an to memorize it. We Muslims were taught for centuries now that we receive tremendous blessings if we recite the Qur’an (and we certainly do), forgetting that the primary purpose of the Qur’an is to communicate to each one of us God’s message. This message was not simply sent to be recited but to be understood.

Traditionally, parents kept the Qur’an wrapped in an expensive cloth, on high shelf out of respect… and when they taught their children the Qur’an it was to recite it in front of relatives, to make the parents feel proud and to memorize it to make them feel even prouder. But often they overlook explaining the meaning or focusing on understanding. The focus was traditionally on memorizing. Consequently, we have tens of thousands of Muslims today, who memorized the Qur’an without understanding a word of what they are reciting, although Allah said: “We made it easy to understand this Qur’an and to remember it.” (54:17) He repeated it in Surat Al Qamar four times.

Those scholars did a wonderful job explaining the Qur’an based on the tools of knowledge that were available to them and they certainly helped Muslims solve problems they faced at that time. However, let’s don’t forget that when we solve problems, our solutions will open the door for new problems to appear. So, if we don’t continuously seek new understanding of the Qur’an to solve the new problems, they will accumulate. Hence, it is essential not only to use the new tools of knowledge to seek new meaning, but it is also important to have our priorities in order to focus on the most important problem first. Let’s remember that “We cannot solve our problems with the same thinking we used when we created them.” So if we face new problems, we have to renew the way we think. This is the reason our problems regarding important issues are accumulating and we became consumers to the knowledge of other people, when our forefathers were leading the world in new innovative thoughts.

Muslims in general ended up with an assumption that it is not easy to understand the Qur’an on their own. If you want to understand, you need to ask a scholar. The scholars in fact became the official interpreters of what God is telling us. This created a bigger problem because these scholars studied mostly with older traditional scholars who got their knowledge of the meaning of the Qur’an from a previous generation of traditional scholars and so on. Even when a scholar wants to think outside the acceptable traditions, he is attacked.

Today, Ibn Katheer’s commentary on the Qur’an, is still considered by most Muslims, the reference to understand the Qur’an. Ibn Katheer died in 774 H or 1327 CE. He certainly did his best during his life to explain the Qur’an utilizing the tools of knowledge available to him. Is it then logical, that millions of Muslims depend on a 700 years old understanding of the text to find solutions for today’s problems, when the world is doubling the amount of knowledge every few month?

Many events have taken place in the last decades that lead to the appearance of Al Qaida and later ISIS. These organizations use the Qur’an and the Sunna to justify terror as a mean to reach their political objectives. Hence they are dangerous to the majority of Muslims who don’t agree with their understanding of Islam. But more so for our children who were targeted for recruitment by these terror groups.

In order to counter the extremists’ plans, young Muslims who are targeted for recruitment need to understand the essence of the Qur’an and its response to alienation and discrimination. Who is the enemy? Is every non-Muslim an enemy? Is revenge the proper response? Does the Qur’an teach that young Muslims should blow themselves and their enemies away? What do the Qur’an and the Prophet teach us?

Many Muslim scholars worked on this problem and they held conferences where they met and discussed the problem and proposed solutions. Those solutions remain theoretical. Even Al Azhar took initiatives and been doing a lot of work to reintroduce Islam as a moderate and peaceful religion.

I have a different approach that depends mainly on you and I to solve this problem of introducing the Qur’an to our children in a contemporary language that they understand with solutions to problems they have and most of us know nothing about, unless we take our children seriously and talk to them.

My background as a strategist and the years I invested working on a Qur’an translation, targeting young people, gave me an understanding of how to solve the problem and I know that the Qur’an is the best document we can make available to young Muslims to counter the extremists abusive and oppressive misinterpretation of the Qur’an.

From experience, the best way a young Muslim will understand the Qur’an is by teaching him/her to use critical thinking. It is that mode of thinking in which the young Muslim improves the quality of his or her thinking by skillfully analyzing, assessing, and reconstructing ideas. It also requires a commitment to overcome our native Islamocentrism and sociocentrism.

Using critical thinking to evaluate an idea will not be based on the importance of the person who related it or its source but based on its true worth to move Muslims, and humanity forward. Instead of consuming ideas we need the new generation to start producing them.

God in the Qur’an wonders in Surat Muhammad:

We need to introduce the keys to these locks.

Once an average Muslim learns the methodology of thinking critically, he/she can check what others are telling him/her for accuracy, relevance, significance, logic, and fairness.

Through training programs that I and a group of trainers can design, a young educated Muslim can learn to:

Those who get the training can become trainers and train others in their area.

I am calling Muslims to wake up and to respond favorably to the call of the Qur’an for each one of us to think, to reflect and to use reason when they are reading the Qur’an.

It is high time for Muslims to heed this call because our faith has been high-jacked, either by the traditionalists who refuse to see the need to move forward to the 21st century, or by the radicals who interpret the Qur’an in a way that serves their dark views of the world.

We best develop Qur’anic critical thinking skills through dialogical learning, that takes place through discussions of the Quranic text with neighbors, with classmates, with a teacher or mentor, through a video, a Facebook page, through a Twitter message or SMS text message.

Our goal is to take back the Qur’an from the high shelf and give it back to the common Muslims who need it the most.

The Qur’an is not only for Baraka, it is a plan for a better future for our children and grandchildren. Parents come to me after every khtba wondering what to do and how to answer the questions asked by their teenage children. If we don’t have the answers, the young people will seek answers on their own without our input.

We need to understand that regardless we are consciously invoking change in our lives or resisting it, we are dealing with the same dynamic universal principle and change is an energy which is totally impartial to our wants, needs and desires.

We can choose to see change as an ally or an enemy and it will respond accordingly.

We can learn how the dynamic of change works and align with it in a manner which serves us in healthy, life-affirming ways or we can stay stuck… pushing against it.

The downside to resisting change is that it will have its way anyway, and it will eventually wear out those resisting it.

It has been said that in a contest between a river and a rock the river will always wins. Why? Because the river is willing to follow the natural call of gravity, going over, under, around or, eventually, through the rock, to its destiny which, as with all water, is to ultimately merge with the ocean. The rock is stuck where it is, relentlessly pushing against the river, resisting the natural flow of water until, over a long enough period of time, it’s worn down to a pebble.

Going with the natural flow of the river called “change” is how we reach the fulfillment of a life worth living for our children. My generation failed to change the governing mentality. I hope we empower starting today a younger generation to take the initiative for change seriously for the sake of my grandchildren and yours.

I pray that The World Muslim Communities Council will take this challenge seriously and make it a priority.

Thank you very much.